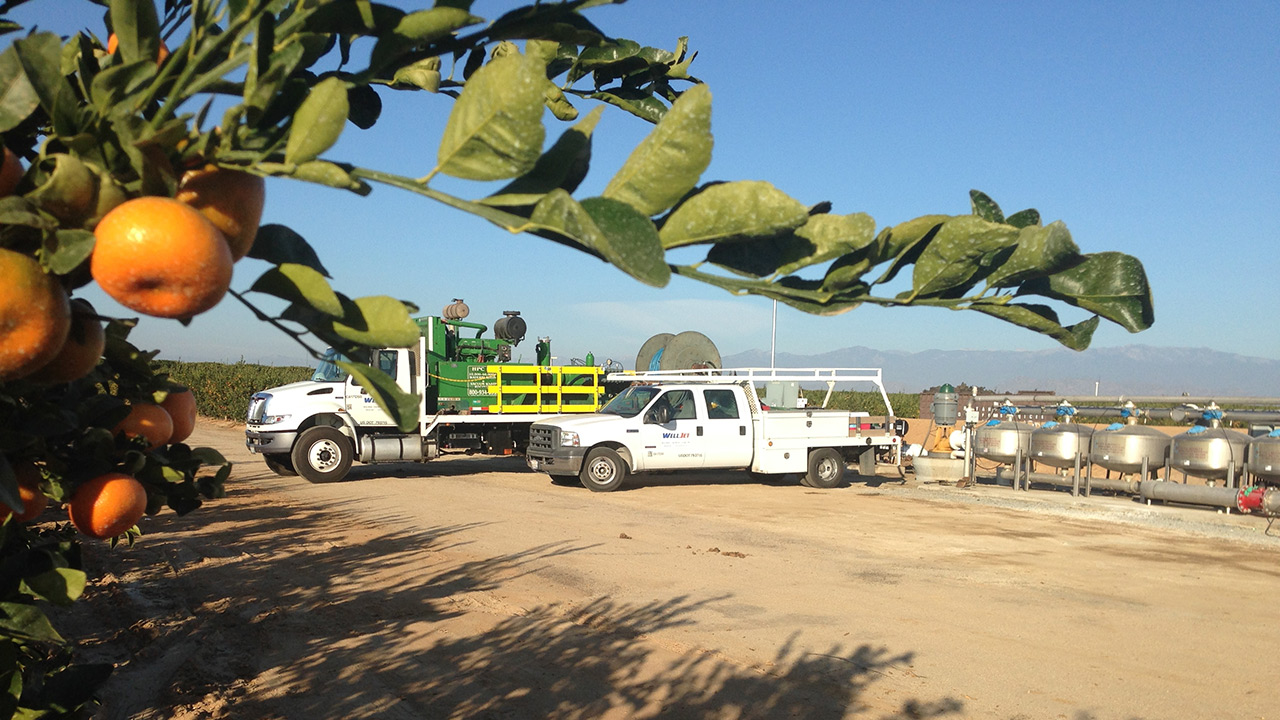 When first put into production, DOM 294-01 produced approximately 1,200 gpm with 45 feet of drawdown, for a specific capacity of 26.7. Over the next several years, the well was mostly idle for extended periods of time (due to water quality issues), punctuated with periodic pump-to-waste events.

In 2012, the well was pumped at rates similar to those recorded at the time of construction.

In mid-2013, the well was brushed – and then again sat idle, this time for over a year.

In early October 2014, Cal Water proceeded with testing a new pump/motor, since 294-01 was to be the sole source of feedwater for an on-site treatment plant then nearing completion. The new configuration was designed to produce 1,200 gpm – as the well had done historically.

During testing, however, the pump/motor broke suction within 1 to 2 minutes of startup. Subsequent testing with adjusting the Cla-Val and/or gate valve on the discharge did not bring any
favorable results:

For a certain time period during one of the testing days, Cal Water was able to maintain a continuous flow of 160 gpm – only about 13% of desired flow rate.

A prominent groundwater consulting firm was tasked with providing recommendations regarding rehabilitation and redevelopment of the well.

On October 27, 2014, a downhole video survey was performed by Pacific Surveys. It showed small, dark nodules throughout the submerged portion of the well, and significant volus of sediment on the louvers. The observed sediment did not appear to be cemented, leading the consulting firm to conclude that the “fouling process that has led to reduction in the instantaneous production rate is likely occurring within the filter pack and near-well zone.”

The consultants recommended removal of sediment and debris, followed by WellJet “to loosen and dislodge a maximum amount of clogging, encrusting and/or biofouling materials present within the well and within the filter pack and near-well zone.”

WellJet (US Patent No. 8,312,930) utilizes a combination of highly pressurized water, specially constructed high-pressure hose, a unique delivery mechanism, and a series of custom-built nozzles on a self-rotating head to remove obstructions from inside the well casing and screen, and to generate disruptive energy deep into the gravel pack and near-well formation to break up harmful deposits that impede water flow.

On December 11, 2014, WellJet (US Patent No. 8,312,930) mobilized to the well site, laid out, tested the Atlantis jetting tool, and went downhole. WellJet treated the perforated area of the well twice, and also jetted the submerged portion of the blank casing, to remove the nodules and colonies of biofouling.

Following jetting, Best Drilling and Pump of Colton, CA performed dual-swab surge-blocking to pull the dislodged material from the gravel pack into the bottom of the well, from which it could be evacuated.

On December 13, 2014, a preliminary step drawdown aquifer pumping test was conducted. DOM 294-01 now produced 1,200 gpm, with a drawdown of 24 feet, for a specific capacity of 51. This was the design discharge rate, with an overall efficiency considerably better than when the well was new:

Pumping rates were limited due to discharge restrictions. If not for those restrictions, Cal Water would have pursued test pumping at a higher rate. However, the above flow rate of 1,200 gpm met Cal Water’s needs, as the treatment plant served by DOM 294-01 was designed for 1,200 gpm.

As a result of this success, the decision was made to forego chemical treatment and additional pumping and surging.

According to a representative of Cal Water: “The results after the WellJet process were favorable and accomplished what was desired.